nafod wrote: ↑
Fri Feb 08, 2019 11:41 am
I had never thought about this, even though growing up in VA and being a Civil War buff, visiting the battlefields and museums.


The Confederate statues of Richmond’s Monument Avenue weren’t erected to honor the service of brave warriors. Those soldiers had been dead for decades before the statues went up. No, the statues were put up by white people, beginning in the 1890s, to remind black people that, despite all that nonsense of Presidents Abraham Lincoln and Ulysses S. Grant, as well as the so-called Reconstruction, we are back, and you are back down. The towering likenesses of Robert E. Lee, Jefferson Davis and Stonewall Jackson weren’t put up to celebrate history or heritage; they were put up as a message: The 13th, 14th and 15th amendments to the Constitution aren’t going to help you black folks because the South has risen from that humiliation. Jim Crow — a name rooted in blackface mockery — is king.

If you doubt that well-documented history — if you are tempted to buy the “heritage, not hate” rhetoric — ask yourself this question: “Where are the statues of James Longstreet?” Remember: Longstreet was Lee’s most trusted general, his second-in-command, his “Old War Horse.” Longstreet was a brave and talented warrior for the Confederacy from beginning to end. But there aren’t any Longstreet statues in Richmond — and there weren’t any at all until 1998, at Gettysburg. That’s because his service to the United States continued after the Civil War, and he did something inconsistent with the purpose of the statues, and of blackface: He treated African Americans as citizens of the United States. Longstreet agreed to serve his reunified country, joined Lincoln’s Republican Party and helped Grant protect the rights of newly freed black Americans.

Longstreet committed two unforgivable sins in the eyes of white supremacists: He criticized Lee’s war leadership, and he led an African American militia to put down an 1874 white rebellion in Louisiana. That’s why this central figure in Civil War history is not depicted among the other Confederate statues in Richmond. The statues were about only a certain kind of heritage, just as blackface was about a certain kind of storytelling. It was about hate, not history or art.

I don’t claim to understand the affinity for the confederacy among southerners, but if that were true wouldn’t there be more statues of Forrest then?

There’s a ton of stuff down in Tennessee named after him, and statues too. And counties, cities, and state forests. 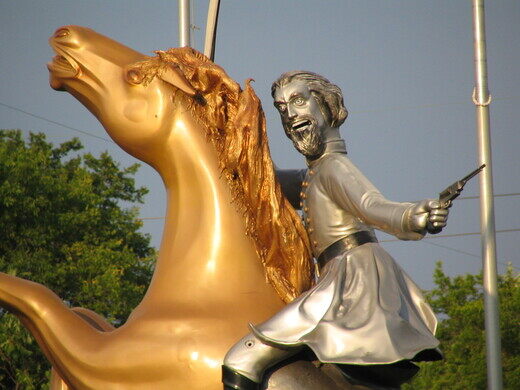 
The monument was designed by Jack Kershaw, a Vanderbilt University alumnus, co-founder of the League of the South, a white nationalist and white supremacist organization, and a former lawyer to Dr. Martin Luther King Jr's killer.[2] In the face of public criticism of the installation, Kershaw defended the statue by saying, "Somebody needs to say a good word for slavery."[2]

I will allow this monument to be justifiably removed for extreme ugliness. Poor taste can never be forgiven.

I just learned that the first person to get the court to put someone into perpetual indentured servitude was a black indentured servant who had been released and was now a landowner and farmer.

Yeah, this is true. Before that it was indentured servitude, not hereditary, but it was a black-on-black "crime" that got the ball rolling so to speak.

Turdacious
Lifetime IGer
Posts: 20667
Joined: Thu Mar 17, 2005 6:54 am
Location: Upon the eternal throne of the great Republic of Turdistan

Embattled Virginia Lt. Gov. Justin Fairfax compared himself to Jim Crow-era lynching victims in a surprise speech Sunday, as he resists widespread calls to resign prompted by allegations of sexual assault. Fairfax strongly defended himself and lashed out at his critics from his rostrum in the state Senate as the 2019 legislative session was coming to a close. "I've heard much about anti-lynching on the floor of this very Senate, where people were not given any due process whatsoever, and we rue that," Fairfax said, referencing legislation the General Assembly passed expressing "profound regret" for lynchings in Virginia between 1877 and 1950. "And we talk about hundreds, at least 100 terror lynchings that have happened in the Commonwealth of Virginia under those very same auspices. And yet we stand here in a rush to judgment with nothing but accusations and no facts and we decide that we are willing to do the same thing," Fairfax said.

When he finished his five-minute impromptu speech, stunned senators sat in awkward silence [...]

Republican House Majority Leader Del. Todd Gilbert said Fairfax's comments about lynchings were highly inappropriate. "That is the worst, most disgusting type of rhetoric he could have invoked," Gilbert said. "It's entirely appropriate for him to talk about due process and we would intend to offer him every ounce of it, and he's welcome to take advantage of that anytime he would like."

But black lawmakers did not object to Fairfax's speech. "He said what he needed to say," said Sen. Mamie Locke. Virginia Legislative Black Caucus Chairman Del. Lamont Bagby said he's heard similar rhetoric from his constituents, who have expressed concerns that Fairfax is being treated unfairly because of his race.

https://www.cbsnews.com/news/virginia-l ... cusations/
"Liberalism is arbitrarily selective in its choice of whose dignity to champion." Adrian Vermeule
Top

Schlegel wrote: ↑
Mon Feb 11, 2019 6:01 pm
BTW, I now predict that not one democrat will resign or be impeached. Justice and consistency do not guide the Party, only the Will to Power.

Time is proving me right. Next prediction: if this haunts the Democrats next election cycle, the headlines won't be about the party's weaknesses or that they did it to themselves, they'll be written from the "Republicans pounce on past mistakes" angle.
"Why do we need a kitchen when we have a phone?"
Top
Post Reply
30 posts